Sedges in Our Wetlands

Sedges have edges. Rushes are round.
Grasses have knees that bend to the ground.

The Cyperaceae are a family of graminoid (grass-like), monocotyledonous flowering plants known as sedges. The family is large, with some 5,500 known species described in about 90 genera, the largest being the “true sedges” genus Carex with over 2,000 species. The stems of Cyperaceae are often triangular and mostly solid, whereas those of grasses are never triangular and are usually hollow except at the nodes. Sedges differ from grasses in many features, most obviously in their sheaths and the arrangement of the leaves on the stem. The leaves are arranged such that they spiral around the stem in 3-ranks and have a basal portion that sheaths the stem. The flowers may have both male pollen-bearing and female ovule-bearing parts, or are unisexual, and are usually clustered into greenish-to-brownish spikes. The fruit is dry and seed-like (called achene). Fossil sedges are known from as early as the Eocene 56 to 33.9 million years ago (mya) and modern sedges are very similar to ancient fossils.

The ecological importance of sedges is extraordinary. Sedges are often found in moist habitats such as bogs, edges of freshwater and saltwater marshes, and dominate in wet mountain meadows and other high-elevation habitats. They are significant, often dominant components, of many types of wetlands throughout the world, both tropical and temperate. They are thus of crucial importance to primary productivity. Their fruits, and sometimes their shoots and tubers, often produced in quantity, are important food for many aquatic and amphibious animals. Large stands of sedges are also critical as cover for many wetland animals. Sedges not only are important components of stable wetland communities but also play a major role in wetland succession. Many species of annual and perennial sedges are the first colonizers on the bare soil of newly created wetlands. In mature, stable wetlands, these species are replaced by the longer-lived perennial sedges. Seeds of sedges may arrive in new wetlands by dispersal, typically by birds.

Few sedges are crop plants. Of these, by far the most important are the Chinese water chestnut (Eleocharis dulcis) and chufas or tiger nuts, cultivars of the yellow nutsedge (Cyperus esculentus) grown primarily in Africa. In both species, the edible parts are underground tubers.

Throughout the world, many species of Cyperaceae have importance in weaving mats, baskets, screens, and sandals because of their strong, fibrous stems and leaves. California baskets, a cultural icon, represent a connection to ancestors, community, and future generations. Plant resource use is imbued with ecological knowledge that takes many forms, spiritual as well as physical.

A substantial number of sedges are economically important because they are weeds. Purple nutsedge (Cyperus rotundus), one of the world’s worst weeds, infests crops throughout tropical and warm-temperate regions of the world. The yellow nutsedge (Cyperus esculentus), also a weed, is a serious threat in cooler climates, causing considerable crop loss. Bulrush is similar to the cattail inedibility, although it is purportedly sweeter. The rhizome is used for the black element in a basket design. Rhizomes are initially creamy white; they are soaked from 3 to 6 months with acorns and a piece of iron, ashes, or walnut husks until a dark brown to black color is obtained. The black and brown fibers are stored to dry, then woven as design elements into coiled baskets. Both cattails and tules were used as insulating thatch for structures, large and small. Tule houses were common throughout many parts of California; the overlapping tule matters were well-insulated and rainproof. Willow poles, arched and anchored into the ground and tied with cordage or bark, formed the framework. The walls are thatched with mats of tule or cattail and secured to the frame. Bulrush stalks are used to weave matting, as well as for bedding and roofing material. Several California Indian tribes make canoes of tule stems bound together with vines from the wild grape. Groups located near the California coast, on mudflats and in marshes, used tule to make large round mud shoes for their feet so they could walk without sinking. Duck decoys were made of tule. Shredded tule was used for baby diapers, bedding, and menstrual padding. Women made skirts from tule. During inclement weather, men wore shredded tule capes, which tied around the neck and were belted at the waist.

How to make a Tule Boat 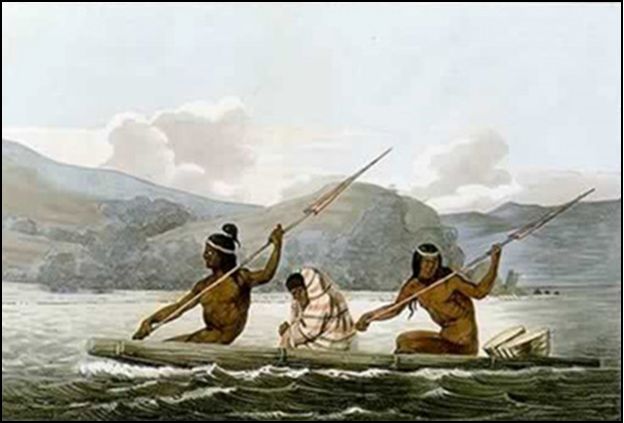 The interior of each long tule stem is filled with spongy tissue packed with air cells. It is the pithy interior of the tule stem that makes it such a unique and useful form of water transportation. Tule boats, or tule balsas, were used by California Natives to travel across inlets, deep marshes, lakes, and bays. A core of willow saplings provided shape and rigidity to the bundled tule form. The materials utilized for lashing in the photographs were 2-ply cattail cordage and split grapevines. Long willow withes and dogbane cordage were also used for tying tule boats together. Tule bundles wrapped and tied together Cottony seeds used by birds for nesting, by people inside pillows, absorbent in deerskin diapers, and cradle padding.

All parts of the cattail are edible when gathered at the appropriate stage of growth. The young shoots are cut from the rhizomes (underground stems) in the spring when they are about 4 to 16 inches long. The raw young shoots are tasty both raw and steamed, and the stem base can be boiled or roasted like potatoes. The young flower stalks can be taken out of their sheaths and boiled or steamed just like corn. Cattail pollen is a fine substitute for flour; it is a bright yellow or green color and turns baked goods a pretty yellow color (which children love). The rhizomes (underground stems) and lower stems have a sweet flavor and can be eaten raw, baked, roasted, broiled, or ground into flour. One acre of cattails would yield about 6,475 pounds of flour. This flour would probably contain about 80% carbohydrates and around 6% to 8% protein. Flexible baskets are made of twined cattail. Cattails and bulrushes were also twined to form mats of varying sizes for sleeping, sitting, working, entertaining, covering doorways, for shade, and a myriad of other uses. Some tribes used the leaves and sheath bases as caulking materials. After dipping the spike in coal oil, the stalk makes a fine torch. The fluff can also be used as tinder, insulation, or for lining baby cradleboards. Lengths of cattail were plied into rope or another size cordage, and cattail rope was used in some areas to bind bundles of tule into tule boats. Air pockets or aerenchyma in the stems provide the buoyancy that makes cattail and tule good boat-building material. Weaving and tying strand materials can be rhizomes, leaves, or stems. Fine basket weaving was done with sedge rhizomes. Patches were intensely cultivated and harvested with deep rituals. Baskets made from Santa Barbara Sedge, note variety of designs, weave, and use

Baskets and basket weaving were central to the daily lives of California Indians and contributed to over 50% of the entire material culture. This means baskets or fiber comprised over half of all items made or used for clothing, bedding, cooking, eating, storage, harvesting, or hunting and fishing. White Root, a preferred cultivated Basket Weave Sedge, is found in the understory of valley oak riparian woodlands. In most cases, basket weavers prefer white-colored rhizomes over darker or brown rhizomes, which are the result of soil type, cultivation, and treatment. In California, sedge beds are managed through selective harvesting, thinning, weeding, and digging to stimulate desired rhizome length and morphology. Traditionally tended white root plants have rhizomes as long as 2 meters, whereas untended plants have short, twisted rhizomes. Rhizomes are debarked and split in two while fresh. The prepared rhizomes are then dipped in water and used as the sewing strand for coiled baskets. Intricate baskets can take over 500 hours of hand labor. Shape, designs, and weaving patterns have to be envisioned at the start and followed consistently, a difficult task and true art form.